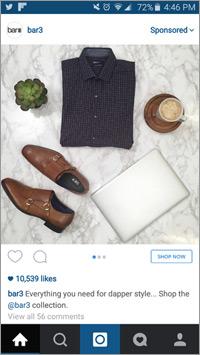 Not long ago, Instagram was as ad free as a Ken Burns marathon. As new data shows, however, those days are long gone.

In fact, Brand Networks saw ad impressions on Instagram rise more than thirteenfold from 50 million in August to 670 million in December.

The ad network expects to be delivering more than 1 billion monthly Instagram ad impressions by the end of the first quarter.

The surge can safely be attributed to Instagram’s decision to offer its application programming interface to outside parties, in August. With the change, brands and their developer teams were invited to plug their software directly into Instagram’s API.

Among other efficiencies, this allowed brands to more easily plan, buy and execute their campaigns on the popular social network.

That said, the growth still comes as a shock to Jamie Tedford, founder and CEO of Brand Networks.

“The pace and scale of investment from our clients [in Instagram advertising] exceeded our expectations dramatically,” Tedford notes in a new report.

The rapid increase of ads is occurring despite the rising cost of ads on Instagram. Across sectors, Brand Networks recorded a fluctuation in CPM pricing from $5.21 in September to a peak of $7.20 in November — peak shopping season — before declining to $5.94 in December.

An early participant in Instagram’s Partner Program, Brand Networks tracked various metrics related to spend and performance throughout the second half of 2015.

To differentiate itself on an increasingly saturated platform, Tedford expects Instagram advertisers to embrace more premium ad formats — and video especially — this year.

During the fourth quarter alone, video ads as a percent of total ads served by Brand Networks jumped up from 9.54% in September to 22.52% in December.

“Video advertising on Instagram is rising to prominence incredibly quickly,” according to Tedford.